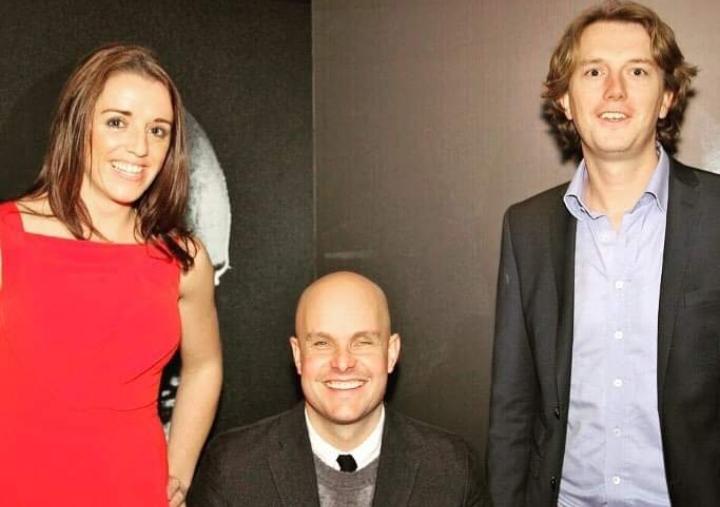 We had rented a small yacht in Athens: Piers, myself, our partners and our close friend Nick Wolfe who was skippering. All hands were on deck in the hot sun as we sailed towards the harbor of a small Greek island, when suddenly through the indigo-blue Aegean sea, a dolphin jumped beside us and began swimming along in the boat’s bow wave looking at us, delighted with how much fun it all was. Equally as excited as the dolphin, Piers shouted, “Nick! Nick! Can I get in?” Nick laughed. Piers laughed. We all laughed, as he realised the boat and the dolphin would keep moving and he would be instantly left behind.
This is how I will remember him. The joyful joiner. The man who would ask how great the night out or the trip away could be. The enthusiastic socialiser. My friend for years and years before we became adventurers creating a new endeavor together.
I had just left the National Rehabilitation Hospital in November 2011 when we held the first Run In the Dark in Dublin. It rained. A lot. Roads were closed and 2,000 people turned up and ran through Trinity College slick with rain. 2,000 more ran in other places around the world that night and in a very dark time, we were filled with hope. It came from Pier’s organisation, vision and energy in a crisis; his willingness to try things he had never done before. He was a born entrepreneur – that night he was on his bike cycling between the Radio Roadcaster making announcements and the volunteers who had come, many because they knew him and wanted to be involved.
And from that night, he took this event from strength to strength – to 25,000 – from those small beginnings. From 2011 to 2016, Piers led the Mark Pollock Trust after my accident that left me paralysed. He brought his enthusiasm and entrepreneurial mindset to everything we did.
Without Piers’ imagination, drive and leadership – his willingness to try – we simply wouldn’t have been able to make it happen. He brought us all together – my partner, Simone George, and the rest of our Trust and Run in the Dark family around the world, in particular, Anna Silvestri, Sarah O’Donovan, Jane Ritchie, and our board members know what he achieved and helped us to achieve.
In 2014, Piers came and lived and worked with Simone and I in LA for three months meaning I could take part in a groundbreaking paralysis treatment trial at UCLA. When I asked him to come out and to be part of it, as my Ekso Bionics exoskeleton spotter, he didn’t hesitate for a moment. He never did, that’s what I loved about him. He was a natural statistician and data guy and we were together walking that corridor in UCLA when I reached my 1 millionth step in the robot, with Piers “running the numbers”. We celebrated that night with killer margaritas. Working both sides of the work and play equation, no half measures – there never were.
Piers loved his family. He talked about them all the time. He talked about his home in Kildare all the time. I know he was the star attraction with all of his nephews and nieces. We caught a glimpse of that in LA, when Simone’s cousin came to visit Disneyland with her children and meeting Piers was a bigger hit with them than meeting Goofy or Mickey Mouse.
He was a sportsman who contributed so much to Dublin University Boat Club and Old Wesley Rugby Club as an athlete, coach manager and committee member. And, I know he was quietly satisfied with his rugby tour nickname ‘Try Time’ for dotting down with ease between the posts so often that particular season.
And, I will remember him standing in the sunshine at Taste of Dublin thrilled with himself, because he had managed to gather another 3 half-price bottles of Prosecco just before closing time for our group. We went there year after year and at Henley Royal Regatta too where the £10 per pint of Pimms gave him less joy, especially when he couldn’t negotiate a deal on the price. He was always cutting a deal; as he said, “working the angle”.
He was the wide-eyed experience seeker who relentlessly pursued the next moments. And, that’s where this devastatingly ends. Piers White died during an adventure on Mount Kenya and I write these words not yet able to accept that we’ll not meet up for that pint in McSorleys when this pandemic ends. That’s what we had agreed just before he left for Africa. It’s not going to happen now and I’m struggling to make sense of that reality, the permanency of it.
Piers had too much life in him for it to be true that he is gone. And, I’m so sad that he’s not going to just appear again – I just hope he went to sleep that night on the mountain happy that he was out there doing it again; living life. Thank you, for being you, Piers.
← Speaking about psychological safety in Dubai BBC Talkback →