My first piece of kit post-fall: the table my dad made 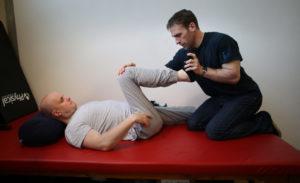 I had an unexpected rush of emotion this morning as I rolled into my kit room in Trinity College Dublin. Simone, my fiancée, hadn’t been in here for a while, and she said, “Oh, look! Your red table. I’d forgotten about your red table.” “Imagine,” she said, “There are three robots sitting up on your red table.”

I’ll try to explain now how such a rush of emotion came from the gathering of four inanimate objects that I couldn’t even see. Some months after the fall that nearly left me dead, but instead compromised and left me just paralysed, I didn’t know where to start. My body didn’t know either and produced these horrific infections, which would last weeks, keeping me in intensive care for months. So when a sports sponsor of old came back and said he would sponsor me again, this time to rehabilitate my broken body as best I could, I decided that a gym targeting the paralysed parts of the body, would be my first move.

This brought Simone and me to a training centre in California. It was an amazing place, especially when you emerge from a spinal unit where everyone is in bed or in their wheelchairs. Here, 40 people at a time might be out of their wheelchairs, doing assisted squats, walking on treadmills strung up in a harness, or those like me who are paralysed from the waist down, but may have some flickers of function in a hip flexor, lying flat on their backs on large physio tables with their trainer moving their knee to their chests as they tried to join in.

South Pole Simon, my old teammate, joined us in California. He trained as a trainer so when we came back to Dublin, we could keep going with the aggressive physical therapy that we started out there. I called my Dad on the way home from the US and explained I needed a table low enough for me to get on to and high enough so Simon wouldn’t hurt his back, and wide enough for me to be able to roll or for him to be able to get up on the table to move my legs. “No problem, son,” my Dad said. My Dad, like most of my mates in Northern Ireland, has a man or woman who can do or make the thing that’s needed. And as throughout my whole life, my Dad just made it happen.

The physio table that my Dad made me became our first piece of equipment in our then empty kit room. It has a cushioned red leatherette top and strong legs, low tech maybe, but it was vital; it was the foundation stone from which we built our research programme.

And this was the picture Simone gave me as we walked into my kit room – sitting on this old, low-tech table, was this incredibly new, almost futuristic tech – the three Ekso Bionics exoskeletons, sitting side by side, like lads on a wall watching the world pass by, as they waited for us, as they waited, in fact, for all of us. 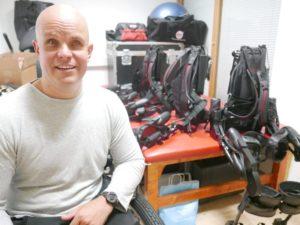 Three exoskeletons. Sometimes I can’t believe it has taken this long, but in moments like these I am overwhelmed that we have come this far, this fast.

We were in my kit room today because we are making a film with Ekso Bionics, the robotics company who made these robots and whose great people we have been collaborating with for the past 6 years. One of the robots, the lad on the table closest to the door, is the robot that I have walked in since 2012 (plus a few upgrades and minus some ‘improvements’ I broke out of him during my million steps campaign!). The second lad is for a research partnership that we have created between Trinity College Dublin, Ekso Bionics and ourselves to study the response to walking for 24 paralyzed subjects, which research will be followed by a combination study adding electrical stimulation of the spinal cord. And, the third lad is launching our Exoskeleton Access Programme at Dublin City University to provide universal access to the Ekso for paralysed people, stroke patients, those with MS and other neurological conditions for a nominal fee.

Walking, upright, weight bearing will absolutely be part of the cocktail of interventions that becomes the paralysis cure. This is even more important for other less complete injuries, from paralysis, stroke, MS, etc. We will need to model human movement and right now, I believe, the robotic legs from Ekso Bionics offer the most effective way of doing that. Whether the other ingredients in the cocktail are nerve bridging, pharmacology, stem cells, electrical stimulation of the spinal cord, optogenetics or some other thing not yet conceived of, robotics will play a part in this. Progress is incremental with the odd large leap. I couldn’t have got into this robot without risking a broken bone or stretched tendon without the aggressive physical therapy and I couldn’t have done that without my Dad’s red leatherette table, South Pole Simon and all of you bringing me along and I couldn’t be training to walk now without my lad, without my Ekso Bionics robot. So thanks to you all – now we’ve got to step it up a gear!

← 8 years on from intensive care What is normal? →