For the first time ever I’ve got a guest blog and it is from my fiancée, Simone George. She has been with me in good times and in bad. And, she is alongside me on our quest to find a cure for paralysis. Over to you Simone… 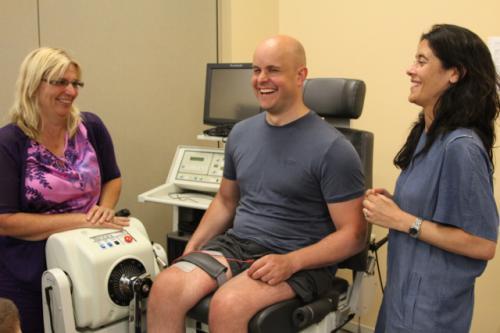 “This photo was taken when Mark, Mark’s trainer and friend, South Pole Simon O’Donnell and I travelled to the US to meet a number of scientists who are looking at spinal cord injury recovery. I can’t quite remember now why we are laughing. Dr. Susan Harkema, Ph.D. is incredibly accomplished, bright and focused on her work. I have been reading journal articles about her since Mark broke his back. Then I met her and she is also warm, funny, kind and so, so passionate about giving people like Mark some victories over paralysis.

The machine Mark is sitting in measures the torque muscles create. So, if you or I were in the position shown in the first photo we would be asked to kick out our leg and the machine would measure the power in the right quadriceps muscle. Mark cannot kick out, so the pads stuck to Mark’s thigh allow the therapist to electrically stimulate the nerves that make the quadriceps contract, the quad should contract and create some torque and a kick – POW!

But functional electrical stimulation has never worked particularly well for Mark. This is probably because of the damage to his spinal cord at L1. Specifically his right quadriceps would never contract. This photo was taken just after Susie’s expertise in action meant that Mark’s right quad finally fired and did so with some gusto. She also got such a good contraction out of his right calf muscle that his right abdominal muscles contracted in involuntary aggressive stomach crunches. This sort of nerve signal confusion is not uncommon and scientists believe it is because the damaged spinal cord reorganizes. Maybe that is why we were laughing in the photo…

Christopher Reeve and the doctors and scientists working with him wrote about improvements in his paralysed body as a result of stimulating his muscles to contract. These were the articles that I read over and over when Mark was in hospital in 2010. I also read many of Dr. Harkema’s articles and was able to tell her that for some reason her name had led me to picture her as an Asian gentleman. To be able to work with her now, to even meet her has been a privilege. Dr. Harkema’s Ph.D is in physiology and working through a collaborative partnership in Louisville she is also the National Director of the Reeve Foundation’s NRN, a cooperative network of cutting-edge rehabilitation centers designed to provide therapies by translating scientific advances into activity-based rehabilitation treatments.

The Mark Pollock Trust allows Mark to collaborate with scientists like Susie and for us, as people living with the effects of a spinal cord injury, to advocate for their work. In this case Mark also lent his injury to her laboratory to look at and left Louisville with a novel stimulation program that Mark and Simon have put into action in the gym ever since. The Trust’s ultimate aim is for the best of these therapies to be available for the entire spinal cord injured community.”